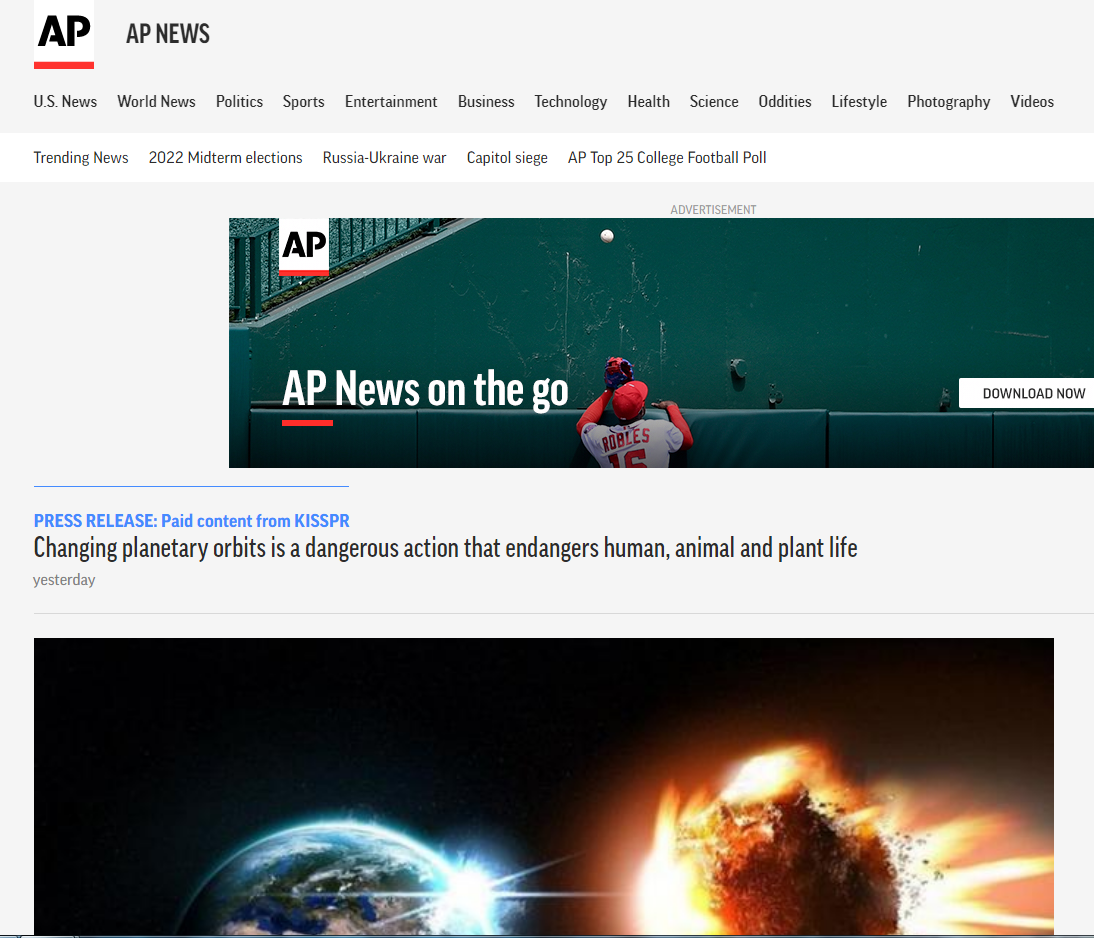 NASA announced on October 11, 2022 that the world’s first spacecraft successfully hit the target asteroid at 19:14 on September 26, 2022, causing it to deviate from its original orbit, this behavior is extremely dangerous.

Each nearby Star ball in the universe affects the orbit of each other! The artificial change of the orbit of the nearby Star ball will affect the orbit of the earth itself, and the “tens of degrees” difference temperature difference formed by the earth in hundreds of millions of years of space and time will also change, the distance between the earth and the sun will determine the temperature change of the earth; When the earth is close to the sun’s orbit, its temperature will rise, while the earth is far away from the sun’s orbit, its temperature will decrease. The Chinese ancients thought that comet “broom Star ball” was an unlucky Star ball, which was very reasonable! Because comets near the Earth will have an impact on the Earth’s orbit! Therefore, the Earth’s environment will change abnormally, which is the reason why more natural disasters will occur when comets affect the Earth’s orbit! Therefore, humans cannot arbitrarily attack planets that do not pose a threat to the Earth to change their orbits, because changing the orbit of a nearby planet will cause the problem of changing the orbit of the earth itself! This will have the same consequences as when a comet approaches the Earth! The only difference is that the comet’s impact on the Earth’s orbit is temporary, when the comet disappears, the Earth will return to its original orbit. The orbit change caused by the human attack on the asteroid will change the Earth’s orbit forever! Such wrong behavior will destroy mankind itself! Although the “micro planets” that humans attack for the first time are not enough to shake the orbit that affects the Earth’s movement, this ignorance of the initiative to attack the orbit of extraterrestrial planets is very terrible. If the attack on extraterrestrial planets continues unchecked, such as using nuclear bombs to change the orbits of Venus, Jupiter, Mercury, Mars and Saturn in space at will, Our earth will also change its own orbit. Assuming that the earth orbit is close to the orbit of the solar space, when the earth surface temperature rises to 100 degrees Celsius, our human beings will not be able to survive in the earth home; If we humans continue to attack the planets outside the earth at will and change their orbits; If this behavior develops at will, it will destroy our human beings!

Original Source of the original story >> Changing planetary orbits is a dangerous action that endangers human, animal and plant life