AP's report on Zhou Jianghua (Part 3): The birth of a new theory will usher in a new era of interste 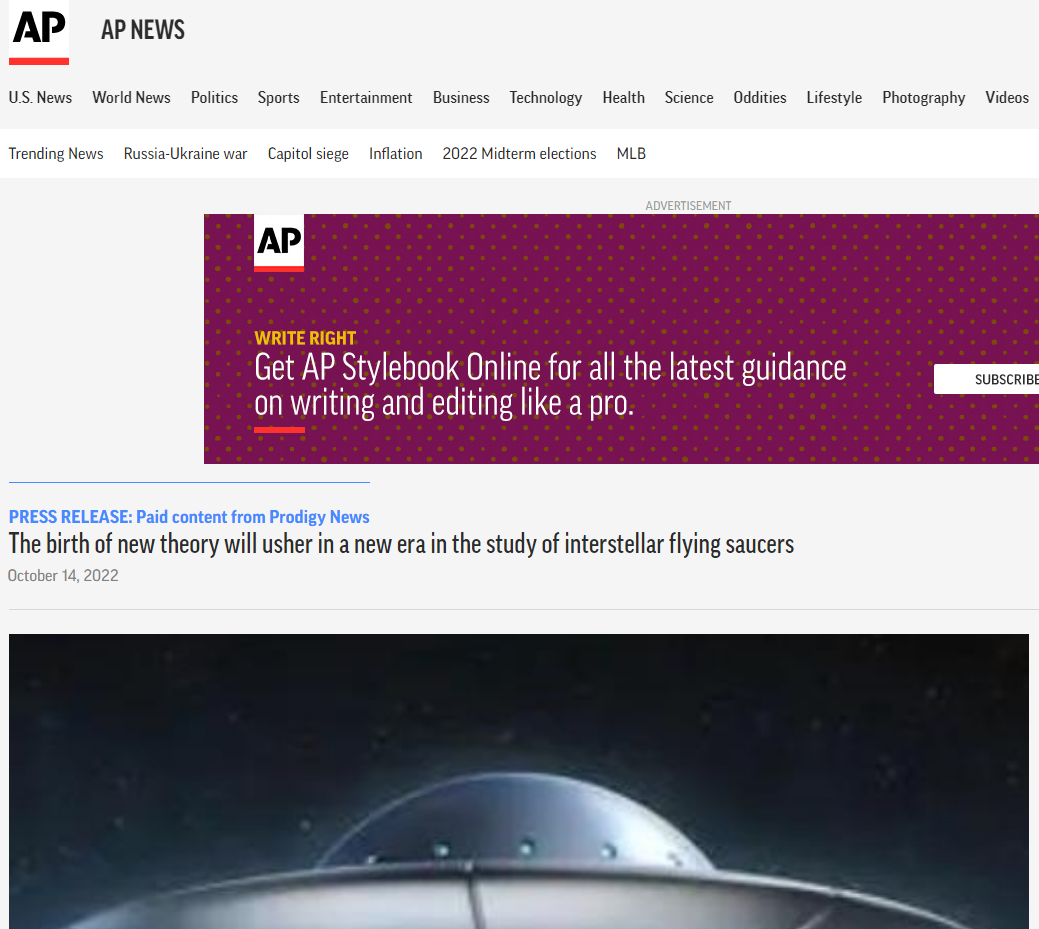 Scientists found for the first time through experiments that there is a repulsive force of electromagnetic confrontation between the “electric field generated by the high-voltage discharge body” and the “electric field generated by the earth”, which makes the high-voltage discharge body produce a “soaring” phenomenon; The discovery of this important experimental phenomenon is of great significance to the research of “discharge flying saucer”!

The research was completed by Zhou Jianghua, a scholar, and the related achievements were published on IEEE of the American Institute of Electrical and Electronics Engineers on October 4, 2022, the paper title was: “The Birth of a New Theoretical System of Physics in the 21st Century Will Usher in a New Era of Interstellar Space Flying Saucer Research”.

In the new paper, the author puts forward the “universal repulsive force law” between substance bodies due to the repulsive force generated by the electromagnetic energy emitted by materials against each other; The formula is: F=Q U/R. Through experiments, the author found that there was repulsive force between “electric field generated by high-voltage discharge body” and “electric field generated by the earth” due to the confrontation of electromagnetic energy emitted, which caused the “flying saucer” of high-voltage discharge body to produce the phenomenon of “soaring”. The author discusses the relationship between Star ball in the universe from a new perspective of “the law of the equilibrium distance between the attractive and repulsive forces among Star ball”; This paper expounds that “electric discharge flying saucer” is equivalent to a planet, and uses the relationship between “flying saucer planet” and the gravitational and repulsive forces between planets to realize the cruise of “flying saucer planet” among the planets in the future; The reasons why the “Discharged Flying saucer” has the following characteristics when flying in the geomagnetic field are emphatically explained: the flying saucer uses the electromagnetic force generated by the high-voltage discharge function of the “shell” to produce a vacuum effect outside the “flying saucer shell”, which can further realize the functions of high-speed flight, immediate change of direction, hovering at any height on the earth, and no sound when flying; On this basis, the author puts forward the research and development plan of “space flying saucer” interstellar cruise!

In the newly published paper of IEEE, the author elaborated the scientific significance of the new theoretical system: accelerating the research process of “space flying saucers” can realize convenient interstellar cruise, accelerate the transition of mankind from the “Earth Civilization Age” to the “Cosmic Civilization Age”, and thus change the fate of human self destruction due to large-scale nuclear war! In order to avoid the catastrophe of mankind caused by the outbreak of large-scale nuclear war, it is urgent to develop “space flying saucer” in today’s world! With the birth of the “new theoretical system of physics in the 21st century” advocated by the author, a new era of interstellar “space flying saucer” research will be ushered in!